The fact of the matter is that the Forex market can be very unpredictable, which is why stop loss orders are so important. A stop loss order is one of the primary tools which a trader has at his or her disposal in order to avoid large losses. Today we want to take a closer look at exactly what stop loss orders are, why they are important, and what the different types are.

What are Stop Loss Orders?

Stop losses are a special type of order which can be executed on trading platforms and via your brokers. This is an order designed to limit losses in the even that the market goes in the opposite direction of a trade that was placed.

SL orders are set at a specified amount of pips away from the starting price. For instance, you can set these orders so that if a trade moves 10 pips against you, the trade will close on its own and save the rest of your investment, thus limiting the amount of money lost.

So, in essence, if you place a buy order, but the price goes down, a stop loss order would prevent you from losing the full investment.

The fact of the matter is that markets, especially the Forex market, is very volatile and often unpredictable. No matter how much work and analysis you put into your trades, things can always go wrong, and this is where SL orders come into play. 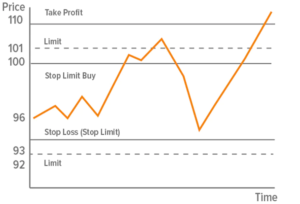 Here we have 5 different stop loss strategies that you can employ in order to limit losses in the event that a trade goes south.

One way to set a stop loss is to set it at a static price point, which means that you set it at a certain point and do not expect to move or change it. This is a really simple way to set an SL and it allows traders to easily set a one to one risk to reward ratio.

In other words, if you want to keep your risk to reward ratio at 1 to 1, you can set your static stop loss at 50 pips below the entry price, while setting the take profit at 50 pips above the entry price. This is by far the simplest way to set an SL order.

This method of setting SL levels is much like the first one we just looked at. However, this one also involves the use of indicators. Some people use indicators such as the ATR (average true range) to do this. The big bonus here is that instead of setting an arbitrary SL, traders use actual technical market information to set the stop loss.

The bonus here is that traders can accurately analyze risk management options by using indicators such as pivot points and price swings and by using recent market information. Unlike simple static stop losses, here you actually use market information to make your decision more accurate, reliable, and less costly in the even that a trade goes south.

For those Forex traders who want to exercise maximum control over their trades at all times while those trades are open, using manual trailing stop loss orders is a good way to go.

In other words, this type of SL involves a trader needing to pay close attention to open positions, because the trader will manually move the stop loss according to what is unfolding in front of him or her.

In essence, the further a trade moves in favor of your position, the further the SL order is moved to accommodate this. Then, when the market trend finally reverses, the position will be stopped out.

This specific type of trailing stop loss is similar to the other one we just looked at, but it allows for even better money management and risk management. Once again, a trailing SL is where a trader can adjust the SL level as the trade moves in his or her favor.

This is of course an attempt to mitigate as much risk as possible in the event that the trader makes a wrong decision and the market moves against him or her. The point here, for example, is that if you set the stop order to 50 pips below the entry price, if the price moves up by 50 pips, you can then adjust the stop order, say by 50 pips.

Now, your SL order would actually be at your break even point, or in other words, at the entry price. This is why this type of SL is also referred to as a trailing break even stop loss, because at the end of the day, the aim is to set the SL at the entry price, so that if a trade goes south, no money will be lost.

The fifth and final type of SL order that we want to talk about today is the fixed trailing stop order. This type of stop order is like the other types of trailing stops, with the difference being that the trader sets the increments in which the stop loss order adjusts.

The bottom line is that when it comes to Forex trading, the stop loss order is indeed one of your best friends. You won’t always be able to place the right trade, and when the time comes, you will be thankful that you learned all about SL orders. They can end up saving you a whole lot of money!